Making lemonade out of lemons. This phrase always irked me as a kid, and still does to some level as an adult. When you are in the midst of a bad situation it is difficult to try and look for that silver lining (another annoying phrase).  Two years ago we found out our youngest son, Owen, had moderate hearing loss.  This little trooper has been through quite a bit already in life with a heart defect and then hearing loss that was completely unrelated.  So, how did we find our silver lining?  Raise our glass of lemonade?  Hockey.  You didn’t read that wrong.  Hockey – his favorite sport.  AHIHA Hockey Camp was our silver lining.

AHIHA (American Hearing Impaired Hockey Association) was founded in 1973 by Stan Mikita of the Chicago Blackhawks – member of the NHL Hall of Fame.  Per the AHIHA website:

“Irv Tiahnybik had a dream for his son Lex, who is hard of hearing. He envisioned a hockey school where hard of hearing/deaf youngsters could learn about hockey without being hassled by hearing people who couldn’t deal with the needs of deaf and hard of hearing athletes.  So, in 1973, Irv, a Chicago businessman, went to his good friend, Stan Mikita. He asked Mikita, then playing for the National Hockey League’s Chicago Blackhawks, for help launching the school. The rest, as they say, is history.”

Being that we are Chicagoland folks and big hockey supporters we were shocked that we had never heard of this.  Thankfully since 1973 the camp has continued and thrived, and is held each summer right here in the Chicagoland suburbs.

The camp itself is a week long camp held each June for an entire week.  The most amazing part is that the camp is FREE for students.  You don’t find free in hockey very often.  This organization has run entirely on donations with no fees are assessed to participating hockey players for the summer camp.  While camp participants have to pay for accomodations, meals and transportation to and from the camp – the seven days of camp is free.

In 2017 we signed Owen up for his first camp and had no idea what to expect.  Hockey camp usually is show up, do drills & leave.  Sometimes there is a little bit of parent interaction in the stands or waiting for our kids to exit the locker room.  We were quite surprised on how this camp was so different.  This camp took our hockey camp experience to an entire new level.

Families from all over the United States gather for this camp.  All levels, beginning hockey players in all levels. 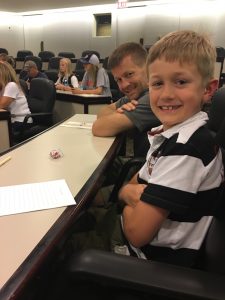 Squirt though high school aged students got to focus on their skills all week.  New students get an afternoon of orientation.  Here, Owen quickly met new friends the very first day of camp.  Will traveled from Minnesota and Kalen traveled from Michigan – two new friends we still keep an eye on via Facebook.  There were other players from all over – Massachusetts, Texas, Arizona – there are hockey fans across the states and many with hearing impairments just like Owen.

Most kids are wearing hearing aids.  Many have cochlear implants and there were quite a few that are profoundly deaf communicate with sign language.  There were sign language interpreters present throughout the camp.

Our original plan was to commute to camp each day.  One of the perks for the camp being located in the Chicagoland area.  That quickly changed and Chris & Owen stayed a few nights at the hotel to spend time with his new teammates.  Swim time, activities and hockey were a daily routine for seven days.

Most days started with breakfast and traveling from the hotel to the rink (team bus made the travel fun!).  Both on and off ice time with the teams occurred throughout the morning and afternoons. 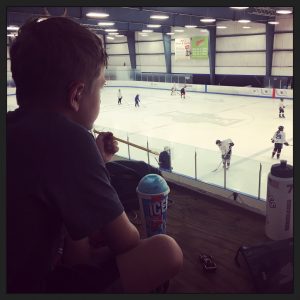 There were coaches from professional teams (such as our Blackhawks) teaching during on ice lessons.  Players were able to watch other levels practice (always can learn by watching the older players!)  At the end of camp the teams participated in games with other local teams to showcase all they had learned during camp.  The evening activities each night were a bit low key but a few nights had the banquet as well as parent events (during the day and in the evenings).  This organization had certainly packed quite a bit of fun into the entire week for all attendees! 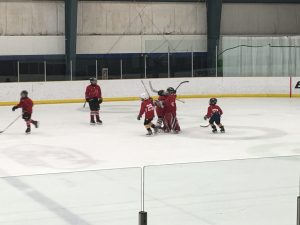 AHIHA community impact for our family

For all the road blocks that have been thrown to Owen over the last decade, I don’t think I can ever be thankful enough for finding AHIHA and the impact it has had on Owen in regards to his hearing loss.

Owen had only been wearing hearing aids one year before he attended this camp.  While our family and friends have been amazing supporting his new hearing aids – this camp was seven days of being surrounded by other kids and adults that were just like him.  No one asked him about his hearing aids.  He was just like everyone else and it did wonders for him.

Newsletters from AHIHA this past year have kept us connected to the organization.  We have been able to cheer on and attend events locally such as the 2018 USA Disabled Hockey Festival.  The website has so much information on their reach they have had on the deaf & hard of hearing hockey community – including this AHIHA YouTube video from an AHIHA player.  The most important information from the newsletters, according to Owen, were the dates of the next camp. 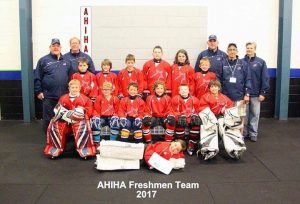 We are looking forward to our second year at camp, June 9-16th 2018.  Owen has hung up his goalie pads and looking forward to some good instruction as a player!  Looking forward to seeing our friends again and making new friends!  The hotel & rink have moved this year and it is even closer to home!  No worries, we plan on staying a few nights at the hotel to really immerse ourselves in hockey again.