With a household of three boys, quiet isn’t a phrase that it uttered here often.  It is loud.  All. The. Time.  From the moment they wake up (usually in the 6 o’clock hour even on the weekends) until lights out (10pm if I’m lucky), our house is noisy.  To combat all this noise, I usually have to be louder then the boys.  Even before the three boys I was known for my ability to “project” my voice.  Even with my volume ability it never fails that someone “couldn’t hear me”.  Because of this I didn’t give it much thought when Owen couldn’t hear me.  Selective hearing was my assumption, not hearing loss.  However, after a marathon month of hearing tests, it seemed our little Owen had some pretty crappy hearing.

Did we think there was a problem?

For years, off and on, we have thought “hey, maybe he can’t really hear…”   The signs were pretty vague – loud iPod, loud TV, repeating questions, etc.  As any good parent would do, we investigated it.  Starting in Kindergarten (2013) would intermittently fail his hearing screens at school but other times he would pass.  We were diligent and took him to our pediatrician & was retested  and he passed.  We kept a good eye on his screenings at school, every failed screen would match up with a passing screen.

In the fall of 2015 we warned his second grade teacher (the amazing Mrs. Schmidt) of our intermittent hearing concerns at our fall conference.  At that time she didn’t notice any issues.  Thankfully she had both his older brothers so she knew our family quite well.  Still, in October 2015 we had an independent hearing eval at the recommendation of our new pediatrician and it looked really good, just a tad below normal. Yippee! Two weeks later in Disney World (you just have to try Disney for Halloween!) he was about 10 feet ahead of us and we were trying to whisper something to each other & he turned around and asked about it.  This validated (at least to me) that he didn’t have any issues.

Then in January of 2016 we got a letter stating he failed his hearing eval at school (again – this makes about 3 fails now).  I, being a concerned mother, totally ignored the letter.  We JUST had an eval in October plus he could hear me 10 feet away in front of the the Tomorrowland Speedway at Disney World’s Magic Kingdom.  I had myself convinced this meant he was fine.   The a few weeks later Mrs. Schmidt voiced some concerns.  Well, sh*t.  She was part of my safety net of “there’s nothing to worry about”.

We first went to an ENT hearing specialist at Lurie’s Children’s Hospital in Chicago.  He failed that hearing test with flying colors.  They were almost insisting Owen didn’t walk out the door unless we ordered hearing aids.  Again, like a totally concerned mother, I was not at this appointment.  No way were we dropping two grand without more research. (Oh, and if you didn’t know insurance DOES NOT cover hearing aids).  We had another ENT consult to evaluate for any structural issues or possible infections that could be the cause of the failed exam.  Alas, there was nothing amiss.  We then drove up to Children’s Hospital of Wisconsin (CHW) for our last ENT consult.  There was no mistaking that he really had issues and would earn bilateral hearing aids.  This was now THREE hearing tests in about 3 weeks so Owen had a sense that he might need hearing aids.  Thankfully he took it all in stride.

In pure Owen fashion – he picked RED for both the hearing aid (behind the ear piece) and the molds (what you see in the ear).  We ordered them in the late spring and picked them up over the summer of 2016. 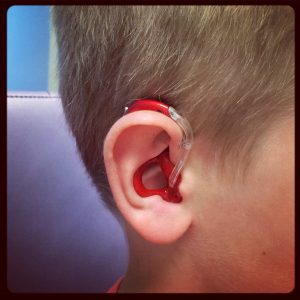 Between the fitting & picking them up I really started to see how bad his hearing was, because now he had let his guard down.  Maybe by being kid #3 I had turned into a predictable mom – but most the time he had no idea what we were saying, he just guessed at the answer.  Will admit, he was pretty darn good at it.

With hearing aids, the difference is shocking.  It’s not actually quiet in the house but you can certainly hear yourself think (at times).  You would be shocked on how much lower he listens to almost everything (TV, iPad).  We had fun in the beginning having him stand with his back to us as we whispered questions from far away & he could answer them.

At the fitting I was taught how to put them in and out.  I wasn’t a master at it right off the bat and even had issues with poking him with my fingernails.  Pretty certain that is the reason that within about two weeks he mastered being able to put them on and off himself.

Why did he lose his hearing?

So, why the hearing loss?  Most family & friends (and even us) assumed that it was connected to his congenital heart defect.  Not the case.

That was the overlying consensus from both ENT and Cardiology.  It could have been a virus when he was born and then had a delayed hearing loss.  He was NOT born with the hearing loss because he has no delayed speech.  His articulation is amazing, which means at some point he had hearing (cause he heard all those letter sounds!).  It also could have been a virus in preschool (we started noticing the hearing loss around preschool age 4).  We will really never know (unless science finds some answers in the future) but very happy we are able to help him now.

Thankfully his friends have all been very supportive.   They were so excited over the first summer  to stop by and see the new hearing aids.  We are now in our second year at school with them and have done fabulous.  They don’t interfere too much with sports or activities, in fact the hearing loss allowed Owen to participate in a hockey camp, AHIHA, in the summer of 2017.  At school he wears an FM system that pipes the teachers voice directly into his hearing aids.  We do have a 504 plan in place at school as well.   Once he is older we can even order the hearing aids that he can connect to his phone  – he could pipe in music directly into his hearing aids or even answer his phone without evening placing the phone to his ear.  Technology at its finest!
Share5
Tweet
Pin33
38 Shares

26 thoughts on “No, He Really COULDN’T Hear Me: Hearing Loss in Grade School”