By looking at me you might think that I have spent my entire life as a runner, biker, or at the gym.  Nope.  I have worn a badge with honor for years as the most out-of-shape skinny person you’ll ever meet.  I actually detest running.  Many other things I could think of to do.  Most involve eating.

Being active was never a problem – we walk everywhere in the summer, choose the bike over the car whenever we can & swim most the summer. Going to the gym was never a problem – our local Fitness 19 was close, perfect for my budget and filled with friends to motivate me.  Going to the gym on a regular basis was another story. I enrolled in 2010 when I still worked as a nurse. Flexible schedule meant flexible workout schedule.  This also meant I could rationalize skipping the gym. “I’ll catch up next week” or my famous “I’m too tired after working 12 hour shift” came to be my motto.   When I went to the gym I actually did well – felt good, had more energy, getting stronger – but all was usually short lived. 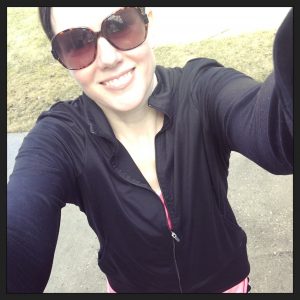 Then in 2012 I spent the morning at the gym on the treadmill.  I didn’t feel well during a sprint so I went home, spent the remainder of the day being a bit lazy because I just felt tired.  That evening I had a night out with girlfriends and on the drive home (before 10pm, mind you) I could have easily pulled to the side of the road and taken a nap.  As I started to get ready for bed I told my husband my heart just felt like a ping pong ball was inside – and after a quick pulse check (perks about having a firefighter/paramedic husband) he insisted I go to the ER.

Like any good nurse – I insisted that I drive myself to the emergency room – & told my husband to stay home with the kids.  When I arrived in triage at the ER I told them that I had palpitations.  They took me back & hooked me up to the EKG machine.  Knowing what I know (I worked in the ER all the time) I knew what they were thinking & all probably expected this to be nothing.  Watching their faces change as the EKG spit out of the machine was priceless – and also scared the sh*t out of me.

The EKG showed Atrial Fibrillation (AFib) with a pulse rate in the 150’s.  That’s a great pulse to have when you are exercising, but I wasn’t doing anything.  So I earned an evening in the ER followed by an admission to the cardiac unit on a cardizem drip.  Thankfully my heart rhythm returned to its Normal Sinus Rhythm (NSR) by the next day all on its own.  My new cardiologist said this could have just been a fluke.  Most people who get Afib are older or may have had a past surgical heart history.  Here I was at age 37 with no risk factors.  Things were pretty uneventful the next year although I did take some medications intermittently (you know, nurses are very compliant with their medical care).

In December 2013 it happened again. This time it was much worse. By the time my husband got me to the ER (there was no driving myself this time) I could barely speak in full sentences.  I sat down to have my blood pressure and pulse taken and the pulse initial read 74…then 87….then 109…then 147…then 164.  Again – after some meds and time – I converted back to NSR.  This time cardiac medications became more routine – all in hope of this not occurring again.  I would still have the occasional palpitations, feeling my heart skip a beat or my heart racing. While my days were pretty uneventful, I knew something had to change.

Then in 2014 I read an article a friend posted on Facebook from Runners World.  Improve heart health by running five miles a week??  That sounded like it could be easy to do!  I don’t like running.  However – I don’t like taking medicine more than I don’t like running.  To motivate me a bit more I decided to start tracking my miles on MapMyRun and in the summer of July 2014.  I mapped out a few easy circle routes. First around the block. Then half mile route.  Then one mile routes. By the end of the fall I could do a two mile run.

Sometimes my mile speed was around 20 minutes. Other times I was around 11 minutes.  When I wanted it over really quickly I could run a 9 1/2 minute mile.  The nice side effect is that after two years I stopped taking the medications.  I still have issues at times – but the frequency has dropped.  Instead of thinking about it every day, now it only crosses my mind a few times a month.  Sometimes change takes time (almost five years to form a good habit) along with a few visits to the ER for the realization that you really do have the power to make the difference in your own health.