My husband recently has set a goal of running a marathon.  I’m a self-proclaimed professional marathon spectator, therefore will not be joining him on this 26.2 mile quest.  My preference is 5k runs.  Three miles seems easy.  Twenty-six miles sounds like there should be a car involved. 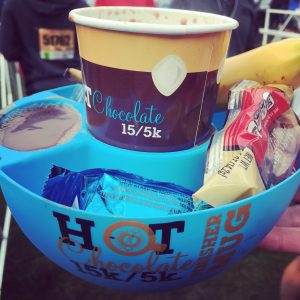 This past summer Chris thought it would be fun to run the Hot Chocolate 5k/15k in Chicago.  Sounded perfect!  He could run the 15k, and I’d gallop quickly through the 5k and wait at the finish line enjoying my sweet treats.  During the registration I realized that the 5k didn’t receive a medal.  All that work and NO medal?!?  I was miffed.  I wanted the bling to hang on the medal holder I am still meaning to make.   There has never been a reason to run more than five miles at once.  So I did what seemed the most reasonable – I signed up for the 15k.

Since I have never run close to 10 miles I knew I had to prepare.  There had to be weekly goals.  Interval training. Outside and inside running and prepare for all types of weather – this is Chicago – anything is game.  Leading into the fall my monthly mapmyrun totals averaged 20 miles a month.   September was challenging.  Three boys – three different schools for the first time.  Soccer. Hockey tryouts.  Homework. Friday night football games. While I still logged 20 miles, it just felt like I should be doing more – and I still had a month to go.

October started with a few great runs.  Then bacteria happened.  Breathing is an important part of running.  Having an upper respiratory infection & running isn’t pleasant.  Really don’t recommend it.  I had my last good run on 10/12 and illness took over.  Always picked sleep over running until 10/22 when I eeked out 5 miles.  The next time I laced on my racing shoes was the morning of the run on 10/30.

There is nothing like downtown Chicago before sunrise.   Skyscraper lights highlighted the Cubs in the World Series run. The excitement before a run is palpable, my only problem was is I had 9.3 miles to run.  Encouraging me during what would be my longest run ever was my husband, Chris,  as well as my good friend, Cathy.  My goal was just to finish, no heroics or PR times were discussed.

Once the sun came up and tucked nicely into my 10:30 corral – I was ready to run.  The weather was kind – slightly cool with a few sprinkles.  Sprinkles are good – that means the sun wouldn’t beat down on me during the run.  Normally during my 5k I will run the entire time.  I didn’t really have a plan this run – my only goal was to keep breathing.

My husband runs much faster than me and was a few corrals ahead of me.  The others were behind me because they registered later but expected them to overtake me before the 5k mark.  Once our corral was at the starting line & released into the streets of Chicago, I was on my own.  Shadows under Lower Wacker Drive started the first mile.  Once back into the city  some of the obstacles included puddle jumping from the recent rain – but it helped break up the blocks leading to the 5k split.  Longing to turn left with the crowd of 5k runners was strong but the desire for that medal was stronger – so I kept on running.

Water stations and better yet, CHOCOLATE STATIONS, kept me going.  I have learned from runs past to walk through the water stations.  Choking on water is never helpful during a run.  So unless I was sipping water or munching on a marshmallow, I was running.  My iPod shuffle served to be a decent mix of tunes that really did help & before I knew it I had hit the six mile mark.  After the next water station the expected happened – my friends caught up with me.  I was still holding my own with less than a 5k left to go.  Cathy’s pace is faster than mine.   I wasn’t about to try and keep up with her but I knew I could keep running.

The last few miles were brutal.  Everything was uphill.  Winds off the lake were fierce.  I finally had to give in to walking & running while heading up Lake Shore Drive.  The Field Museum was my last walking spot before another uphill trek towards the finish line.  Finally – after 1 hour, 39 minutes and 43 seconds – I completed my first 15k.

Afterward collecting my bling, finding my friends & walking what felt like another 5k I was able to enjoy the chocolate & sweet treats and relax – and talk of running again in 2017 already begun.

By the time I was home I felt miserable again – my lungs & body quickly reminded me that the bacteria was still waging its battle.  After sleeping most the afternoon I was about status quo before the run & that’s not saying much.  Another week or so of taking it easy and finally was on the road to recovery.   Worth every mile to earn that medal & check off “15K” on my running to-do list.  Still have no intentions of the full marathon but a half may be on the horizon.  What is 4 more miles after already running nine?